Students were jumping for joy as they opened their results with many achieving a superb set of top grades - including many A*s.

There were shouts of delight at the Rating Lane campus as the students gathered to collect their grades and speak to tutors who were on hand to celebrate and advise on next steps.

Among those celebrating were the highest achieving students Elliott Stockdale and Hannah Dixon who both secured four A*s. The 18-year-olds from Barrow were over the moon with their grades.

Elliott swept the board with A*s in accounting, maths, further maths and business, and will study a degree in economics at Cambridge University’s Queen’s College. He also got an A* in his extended project.

“It’s been my goal to study economics at Cambridge University since Year 10,” he said. “I set myself high standards and I play a lot of sport so I’m very competitive, so I’d predicted these grades since the start of college.

“I’d like a career in finance and my ambition is to work on Wall Street. I’m going to do it – 100 per cent! My mum and my family are over the moon and I’m now off to Preston to show my grandma my results.

“I’d like to thank Barrow Sixth Form College as everyone has been brilliant. You get your independence but lots of support as well. The staff always help you to do your best.”

Hannah Dixon, who joined college from Furness Academy, secured A*s in each of her four subjects - chemistry, maths, further maths and physics – and will go to Durham University to study a degree in maths.

“I’m ecstatic, it couldn’t have gone any better and I wasn’t expecting to do this well. I’ve enjoyed it and the teaching was great,” she said.

Caitlin Patterson, 18, also a former Furness Academy student, will study veterinary medicine at Pembrooke College, Cambridge, after securing A*s and an A grade in biology, chemistry and maths, plus an A in her extended project.

“I am a bit shocked, I wasn’t expecting to do so well,” she said. “I’ve enjoyed studying here because it’s such a different environment to school and you have the freedom to focus on the subjects you enjoy.”

She said she hadn’t even thought about applying to Cambridge until the end of the first year but then said she decided ‘why not give it a try’.

Deputy Principal and Head of Sixth Form Mark Nicholson said the sixth form, which opened in 1979, has gone from strength to strength since it became part of Furness College when the two merged three years ago.

“The sixth form has had a long tradition of success spanning 40 years and this set of students has continued that history of academic excellence with a set of impressive grades of which they can be very proud. We have seen another rise in the amount of high grades awarded this year, particularly in the reformed A levels.

“Over six decades, thousands of students from the Furness area and beyond have bounded down those steps on results day into bright futures full of opportunity thanks to their own hard work and that of the dedicated and experienced staff here at sixth form.”

Hannah Bethell, who went to Furness Academy, achieved 3A*s and an A in her extended project, and will do a degree in medicine at Leeds University. Ben Chinn, who went to Chetwynde, achieved 2 A*s and a B and will study Zoology at Bangor University while Chris Bradbury, a former St Bernard’s pupil, got 3 A*s and will go to BAE Systems to do a degree apprenticeship in nuclear engineering. Liam Edgley, who went to Chetwynde, is now joining Furness College as the Student Liaison Officer after achieving AABB in a 12-month post to gain experience before going to study engineering at Lancaster University.

Maddy Burnside, 18, of Dalton, a former Dowdales student achieved BBC. “I’m very happy with my results because I needed three Cs to get my higher apprenticeship in procurement at BAE Systems. I didn’t want to go to university so this was always the aim and now I’ve achieved it.”

Chloe Dunn, 18, of Dalton, also a former Dowdales student, was the top achieving art student with A*s in A level Art and Photography alongside a B in history. “This is such a surprise, I didn’t expect to get the top grade for both art and photography and I’m going on to do the foundation art course here before I go to university.”

Principal and Chief Executive Andrew Wren said alongside their academic achievements, the students have gained invaluable skills that will put them ahead in their future careers.

“Every year the students set the bar even higher with their grades and, alongside that, they have developed skills of independence, confidence and maturity that will be invaluable for them in years to come.

“We are also lucky to have staff who care about their students and ensure they succeed in their chosen path. This is a day for the whole community to celebrate and be proud.”

Students who gathered for their results enjoyed a breakfast courtesy of the college in honour of their hard work. 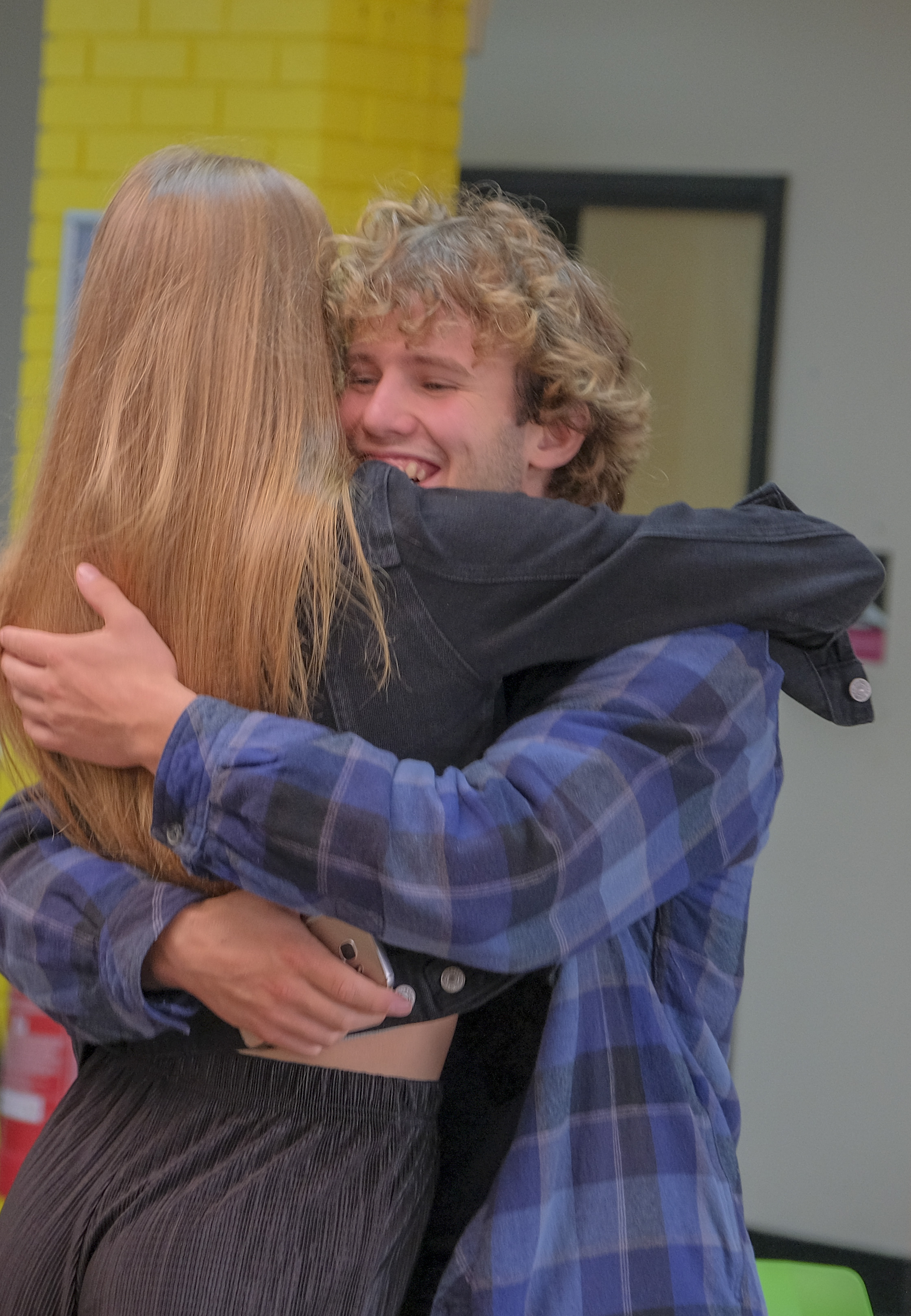 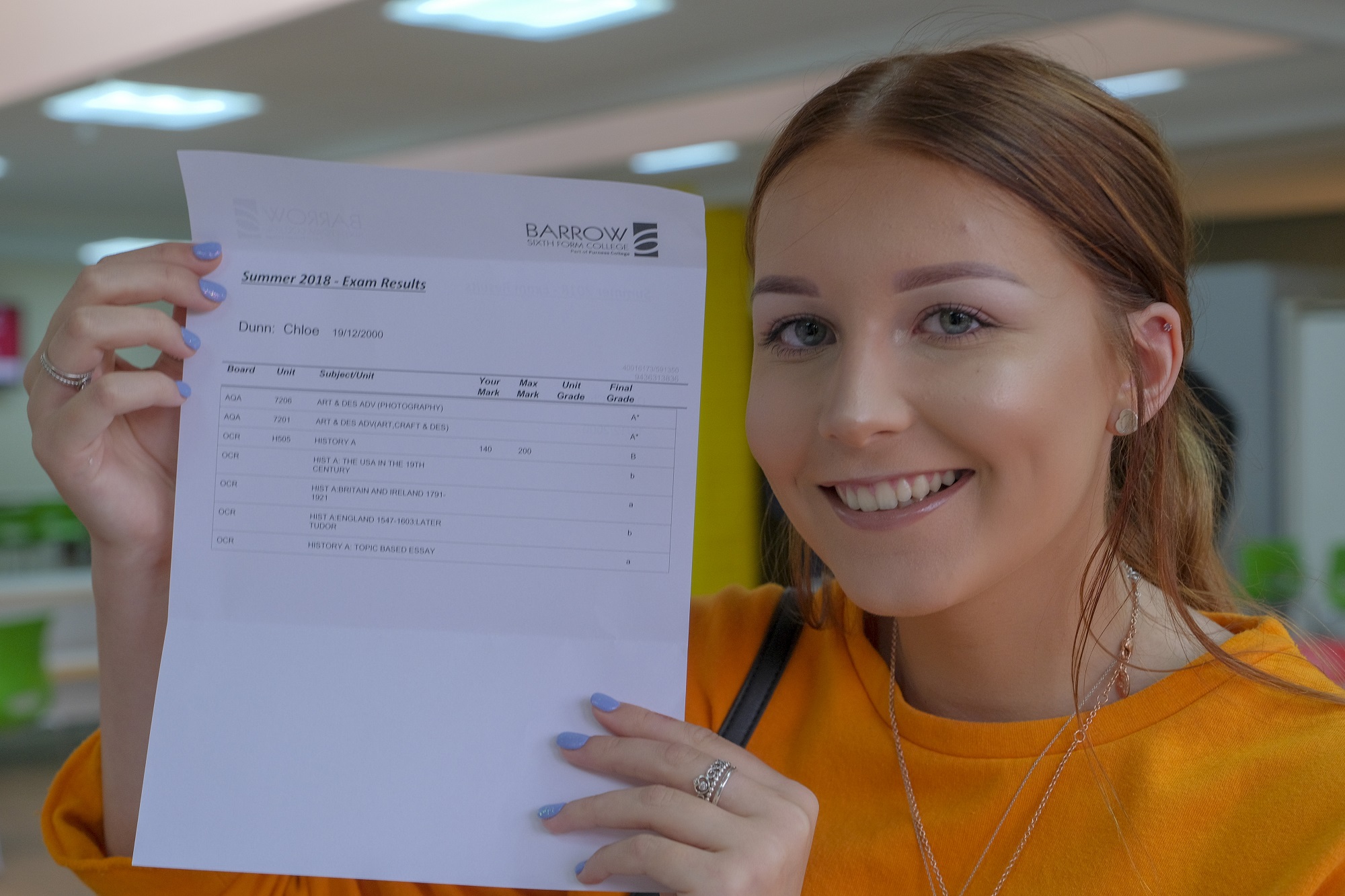 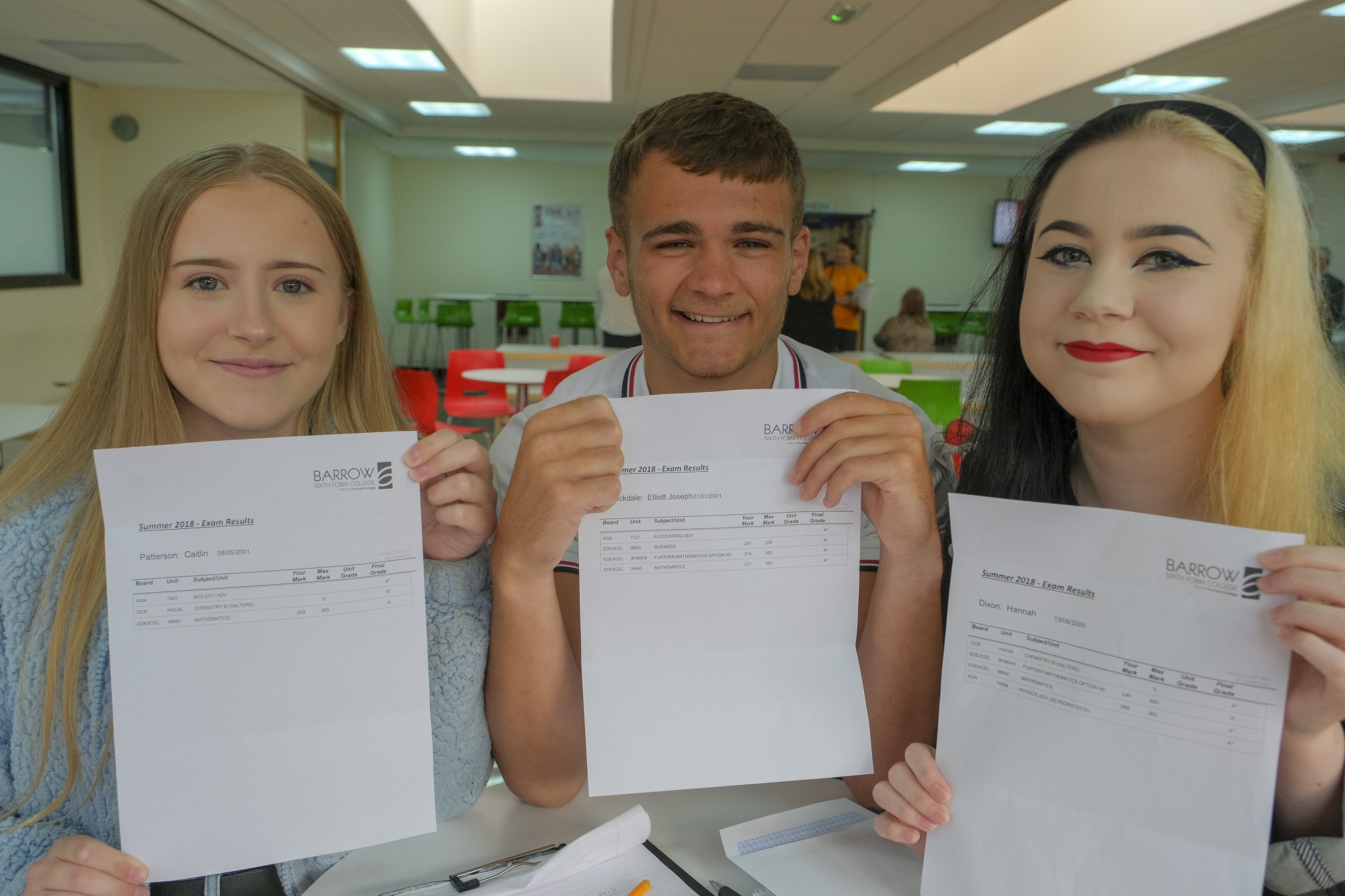